Travel to Lillehammer and Hafjell, Norway

Travelling to the Lillehammer and Hafjell in Norway is easy. Lillehammer is located right off the E-6 highway which is the major travel artery from southern to northern Norway. By car, Lillehammer only two hours from Oslo, four hours from Trondheim and five hours from Ålesund. If you are arriving by plane, just take the bus or train from the Oslo International Airport to Lillehammer. When in the town, buses leave about every 30 minutes to most of the local attractions in the area, and there are frequent train departures to both Oslo and Trondheim.

Ferries from Germany and Denmark to Norway

From Hirtshals to Larvik
The crossing is only 3 hours and 45 minutes.There is a 4 hour drive from Larvik to Hafjell, taking the E18 north to Oslo, then the E6 north towards Trondheim.

From Copenhagen to Oslo
There is a 2 hours drive from Oslo to Hafjell taking the E6 north towards Trondheim.

The railway station is located in the basement of the Oslo airport terminal - easily accessible by escalator from the arrival hall. There are separate platforms for the Airport Express Trains and other trains. All Inter City trains between Skien town in the south and Lillehammer in the north (via Oslo) serve Oslo Airport at intervals of 1 hour during most of the day. In addition the long distance and night trains to and from Trondheim serve the airport´s railway station. Travel distance from Oslo central station to Oslo airport is approx 30 minutes and from Oslo airport to Lillehammer approx 1hr 45 minutes. Lillehammer is located only 180km north of Oslo and 145km north of Oslo airport. You can check out the route planner at www.nsb.no

Type in either "Oslo Lufthavn" or "Gardermoen" in the FROM slot and Lillehammer as the destination, fill in the date and time you land, and then you'll instantly have the train departures around that date and time. Oslo Lufthavn literally means Oslo airport (luft = air, havn = port) and Gardermoen is its geographical name. Both then refer to the airport.

The companies are all located in the arrival hall, on the west side towards the railway station.

Sandefjord Airport Torp is located 300km south of Hafjell and can be reached by Ryanair from many countries in Europe. You can take the train to Lillehammer and the bus from Lillehammer to Hafjell. If preferd going by car there is a 3 hours and 45 minutes drive to Hafjell, first taking the E18 north to Oslo and then the E6 north towards Trondheim

The train stops at Torp station. Passengers arriving by railway are then transported by shuttle bus to the airport (approx. 4 minutes). The bus service runs in connection with the train and is included in the price.

The bus station is located close to train station in Lillehammer. Only 50 meters to walk with luggage. Bus to Hafjell from platform number 7. If you need a taxi phone: +47 06565. Taxies are just outside the train station. All Inter City trains between Skien in the south and Lillehammer in the north (via Oslo) serve Oslo Airport at intervals of 1 hour during most of the day. In addition the long distance and night trains to and from Trondheim serve the airport´s railway station.

From Lillehammer there are buses to Hafjell from platform 7 at the bus station in Lillehammer. The bus stop in the center of Hafjell is only 100 meters from Hafjell Hotell. In the main ski season there is a ski bus between the hotels in Hafjell and the Alpine Center. During the summer there is a bus to Lilleputthammer and Hunderfossen from Lillehammer.

Lillehammer Taxi Center is located just off the bus and train station (Lillehammer train and bus station). Normally there will be taxis that stand right outside when you arrive by bus or train. You can also call +47 06565 and book a taxi.

There is a ski bus between hotels in Hafjell and Hafjell Alpin center between 22 December and 2nd Easter. In addition, there is a separate route to Øyerfjellet with Pellestova from the center of Hafjell for those wishing to test cross-country skiing.

train to lillehammer bus to hafjell 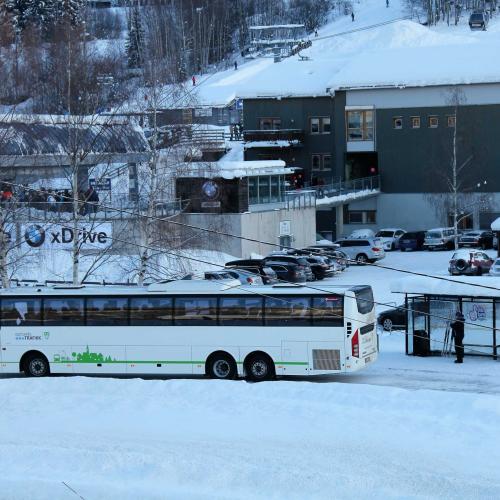 Hafjell Alpin Center, Hafjell Hotell, Hunderfossen Hotell, Nermo, Pellestova and Scandic Hafjell are working on a ski bus for the benefit of guests